Chris Cooper started playing guitar in 1988, when he shed years of exposure to The Beatles, The Grateful Dead and The Allman Brothers in favor of the punk scene – bands like Misfits and Dead Kennedys. But it wasn’t until his first exposure to Joe Satriani that Chris understood the possibilities of his instrument.

A friend of his turned him on to some jazz courses at a local college, where Chris found a world of guitar style and musicianship that he hadn’t learned from the super-shredders. The courses had Chris learning from great players and exposure to the music of Wes Montgomery, Pat Metheny, George Benson, Miles Davis and  Cannonball Adderly greatly influenced his playing. 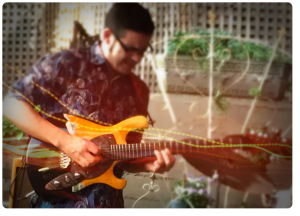 And, in Chris’s words, “SRV still kills me every time I hear him.”

Fast forward to the present

Chris’s musical career has spanned decades and styles from fusion to country, both on stage, in the studio and in private lessons. Since 2004, he’s lived in western North Carolina where he performs, creates and edits lessons and product demos on his YouTube channel Blue Collar Shred, records and teaches.